Rest of Us by Jessica Lott

My review in Shelf Awareness is here.

The Boston Globe review also praised it, saying that, while the plot line was the stuff of chick lit, Lott has written  “a compelling, resonant, richly nuanced, and sometimes heartbreaking portrait of cross-generational love and the meaning o 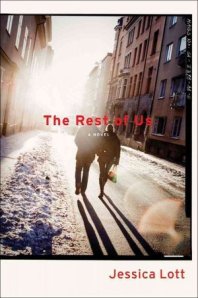 f art. The Chicago Tribune praised Lott’s comic sensibility, adding that Lott writes “with tenderness and restraint about life’s inevitable tragic turns.” NPR’s review called the first chapter “opening chapter is etched in acid….Lott demonstrates a wicked gift for mimicking the meaningless pronouncements of hoity-toity culture criticism….Lott nails that sense of being stalled, of being an adjunct in life when everybody else seems to be a fully inducted player. The Rest of Us itself stalls a bit toward the end, although Lott executes some unexpected riffs on the student-professor relationship plot.”

What I tread too literally, the Trib and NPR nailed as social satire. I love that! Re-reading a book to find what other readers saw is, to me, an essential tool in being a better reader and reviewer.

This entry was posted in Book Reviews, Book Reviews: Shelf Awareness and tagged Jessica Lott, The Rest of Us. Bookmark the permalink.

Book reviews and other literary-related musings

Book reviews, book miscellanea, and the future of the book. Not the last word. Probably not the first, either.

"Hold infinity in the palm of your hand and eternity in an hour." --William Blake